Our offices will be closed on Friday 3 June for the Platinum Jubilee. Please see our earlier update for details on payment dates for the profession.

The Platinum Jubilee court holidays at the end of this week also mean that custody courts due are to be held on Saturday 4 June 2022.

The custody courts will be held in the following locations:

The Legal Aid and Advice and Assistance (Miscellaneous Amendments) (Scotland) Regulations 2022, which came into force on 1 April 2022 also introduced an additional fee of £80 to solicitors representing an accused person appearing from custody when doing so on a day which has been designated a court holiday.

These fees can be claimed for cases at the Saturday custody courts on 4 June 2022.

See our 24 March update for full details on when the additional £80 fee is available to solicitors representing an accused person appearing from custody when doing so on a day which has been designated a court holiday.

The full regulations are available on legislation.gov.uk.

A generic fee has been created for the appropriate fee tables – below is an example of how the fee looks on selection of it from the drop down of fees available.

Please note the advisory text within the work item that explains the criteria that need to be met.

Further information can be entered if necessary, within the ‘Further details’ box. 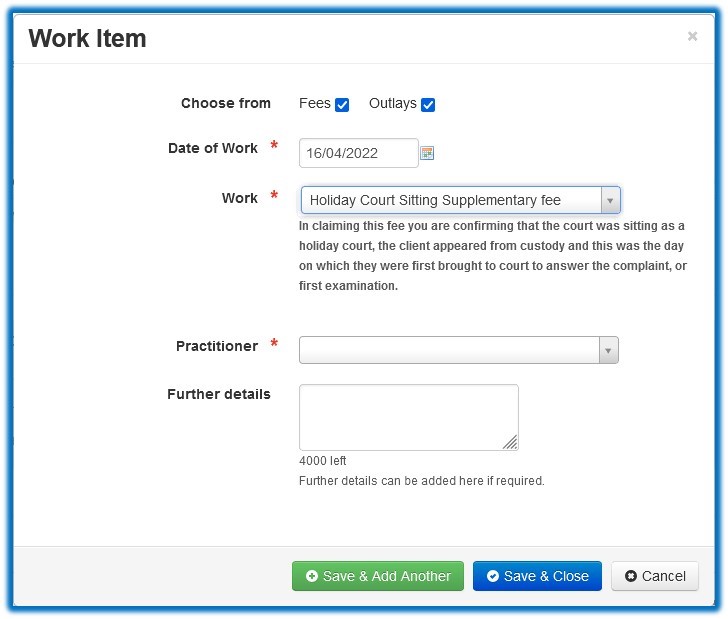 New Advice and Assistance out of hours helpline number

We have changed the number to ring for the out of hours Advice and Assistance. Please note that from 31 July, the mobile phone number will be withdrawn.